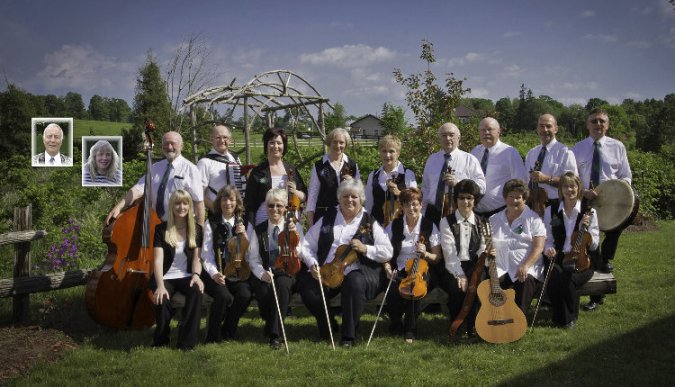 The Donegal Fiddlers Orchestra began in 2002 when a group of Norwood area musicians with a passion for traditional old time music coalesced to form a fiddle orchestra. The group met monthly to play for a dance at the Donegal Community Hall near Norwood. Over time the fiddlers added vocalists and rhythm and harmony sections. The orchestra’s repertoire also expanded to include Scottish and Irish jigs and reels, Cape Breton Celtic tunes, big band and country dance tunes and music for pattern dances.

In addition to continuing to host a monthly dance at Norwood Town Hall, the group performs at church and community fundraisers, agricultural fairs, summer concerts and festivals, weddings and other private functions. Highlights of the orchestra’s engagements during the summer of 2012 were outdoor concerts at Campbellford, Brighton, Colborne, Port Hope and Zwick’s Island Park in Belleville. In 2011 the orchestra provided the opening performances for productions at Showplace Theater in Peterborough and at the Westben Theatre in Campbellford and from 2009 to 2011 the orchestra was featured in the refreshment tent at the Cobourg Highland Games. At our December 2012 dance in Norwood, we were delighted to have Ashley MacIssac join us and take part in our program.

It was a Christmas treat the Donegal Fiddlers and their fans will never forget.  Brilliantly original and massively talented fiddler Ashley MacIsaac decided to drop into the orchestra's December dance at the Norwood Town Hall sitting in with the 22-member group and unleashing some of the most electrifying sounds the venerable hall has ever heard.

"This is a gorgeous place:  it looks like one of the nicest halls you'd see in Cape Breton,"  MacIsaac told the North-west EMC before his surprise set.  "There are a couple of halls like this where you walk in and there's the sound and you say, 'This is a nice atmosphere'".

..."I enjoyed it immensely.  It was a very community vibe of fiddling," he said.

..."I never do this sort of thing.  It was only because they were friendly and everybody I spoke to after the concert in Hastings last month was so nice."